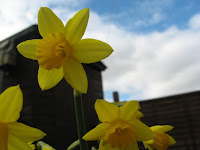 She's home... Fimbri is back safe and sound.  That's the name that I've given to my car, my little C3.  It was a worrying time most of the day thinking about all the parts that needed replacing and the cost and time it would take to do all of it, but in the end, she came  through it brilliantly.  I know this sounds like I'm talking about a child....but you need to know that Fimbri was a special car in the eyes of a special person who has passed away.  I feel now that I'm in charge of taking care of this large piece of machinery the best way I can.
By the way, the photo of the daffodils? ....  Just a little something to make you yearn for spring.
Also today, I progressed a bit further on a baby project at the sewing machine.  It's just a little something to go along with the first finished item.... just needed to use up the left over fabrics.  At the price they are these days, you don't waste a square inch.  A cool day all in all... overcast and sunshine taking their turns. 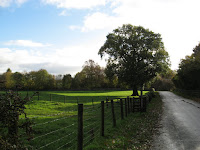 Terry has called several times to try and help get the car sorted, but as I felt it was my responsibility, and he had worries of his own, I took control and sorted it myself.  Sounds like I could have used a bit of patience in all of this, but that's another story.  Onward and upwards as they say.
Thinking positive that Wednesday will bring good news about the car and I can stop worrying.  Bank account will be a lot lighter but at least I'll be safe driving.
Posted by Tessa at 01:26 No comments:

Gone for another year.... 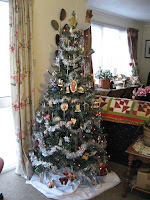 January 2nd....
The frost overnight was heavy, heavy enough to think we'd had a thin dusting of snow and both cars looked like marshmallows.
The Christmas tree came down today.  That and all the trimmings, which weren't many in number.  It's amazing how the house, although small, looks that much bigger again.
So now it's time to progress into another year.  Time to feel positive about everything.  2016 brought the opportunity to own a home, our first one together.  We feel so comfortable here.  It's small, cosy, warm and just what our little hearts have desired for some time.  It's never ceased to amaze me how God works... sending special people to help in the most unusual of situations.
The baby quilt is finished now, but I have some small pieces of fabric leftover so my thinking cap is on to find a way of using it all up as part of the gift.  Will post a picture when I know it's safe to do so....
Posted by Tessa at 01:37 No comments:

Firstly, just want to wish every a very Happy New Year.  It's been a while since I last wrote on here...time to change that.  I'm going to try and manage a few lines more often. 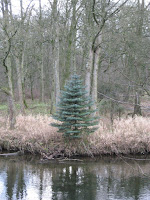 It's been a good day...weather has been cool with a mixture of sunshine and cloud.  It was even raining at supper time...strange to think that it will soon be turning cold enough for heavy frost again tonight.  Thank Heavens we took a good walk yesterday down by the River Eamont.  The picture shows a lone Spruce tree.
Our friends, Lyn and Stu, came over for a quiet cuppa this afternoon. They've been over a few times since we bought our new bungalow...so today it was bringing them up to date with things we have accomplished since their last visit.
The shed is now up and Terry has been hard at work with the inside work of it.  I've been painting the kitchen cupboards, trying to give it a bit of a little lift instead of the grey that it seems to have all over it.  There is new carpet ordered for the master bedroom now and when all of that is done, it will be time to slow down on the spending.  Everything in our new little home looks great and we are very happy here.
Posted by Tessa at 11:17 No comments: