I'm sure most of you know that I'm originally from Canada.  I returned to this country to buy a business with my now ex-husband and two other partners.  We purchased a hotel and transformed it into a nine bedroom bed and breakfast.  The reason I'm telling you this is because I want to show you the quilts that were made to cover the beds at the Manor.  These quilts are still at the Manor accept one that I have kept for myself as it has a very personal story behind it. 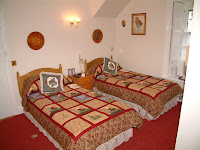 This first picture shows the two single beds in Room #1.  The quilts were made of Log Cabin blocks and pre-printed squares, so they were quick and easy to put together.

All of the quilts at the Manor have Warm and Natural for the wadding and only the quilt in Room 2 was made while I was one of the owners/proprietors of the business.  I certainly didn't have much time for sewing back then. 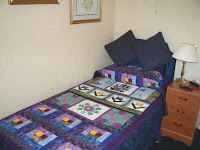 Room #2 contains the Iris Quilt.  I named it after my Auntie Iris who lived with us at the Manor, but has since moved down to South Wales.  I will miss her now that she is so much further away.

This is the only quilt that was created while I was at the Manor.  Across the top of the quilt just under the pillow and in the middle, is a paper-pieced Purple Iris.  The rest of the quilt was built around this block. 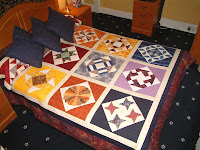 Room #4 has a Sampler quilt on the bed.  Room #3 has two single beds and they have duvets with pink throws on them, so there were no hand made quilts there.

This sampler was done in Canada and it was a block of the month that I did with about  20 other quilters in the north of Ontario. 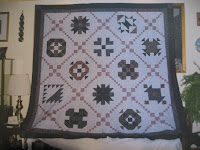 This next quilt was called 'The Millenium Quilt'.  It too was a block of the month that myself and my patchwork group found on the internet that was based in British Columbia.  This quilt was on the bed in Room #5, but I now have it here at home with me.

The block of the month started in January 1999, and with all the blocks completed by December of that year, the layering and quilting would take place in 2000, so this quilt was aptly named.  It was handed quilted by another quilt group and the money raised went to their favourite charity.  My son and daughter in law were married in the year 2000, so their 10th wedding anniversary quilt, which I made for them last year, was created using the same twelve blocks and of course a completely different colour scheme. 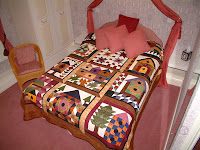 My 'Bird House' quilt is still in Room #6.  The top of the quilt has 12 - 18" square blocks with a narrow attic window framing around each one.  I am hoping that this quilt will be returned to me after my two other partners sell the business as it also has special memories for me.  I will though, need to purchase this one as I sold it to the business with all the other quilts when I left.  I still have the pattern for this so it certainly wouldn't be difficult to recreate the entire quilt again. 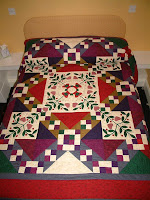 On the left is this lovely 'Jewel Box Garden' quilt on the bed on Room #7.  This quilt was also created in Canada and brought over with me when I moved here.

Since this picture was taken this room has had a complete makeover and is now a much softer cream colour.

The last of the quilts at the Manor is in Room #9.  Shown above on the right is the Panzy Patch quilt and is a super king size.  Room #8 has a four poster bed and the large brocade throw on that bed helps to create the ambiance in the room and won't be changed anytime in the future.

So here you have them....all the quilts that are still at Lowbyer Manor in Alston, and a few others, where I was once an owner for about 26 months.  It was only due to severe personal reasons that all this came to an end much too soon.

So I think that's about all the chatting I'll be doing this evening, so I'm off to bed, once I here from my partner.  It's been one of those nights for him.
Posted by Tessa at 14:58